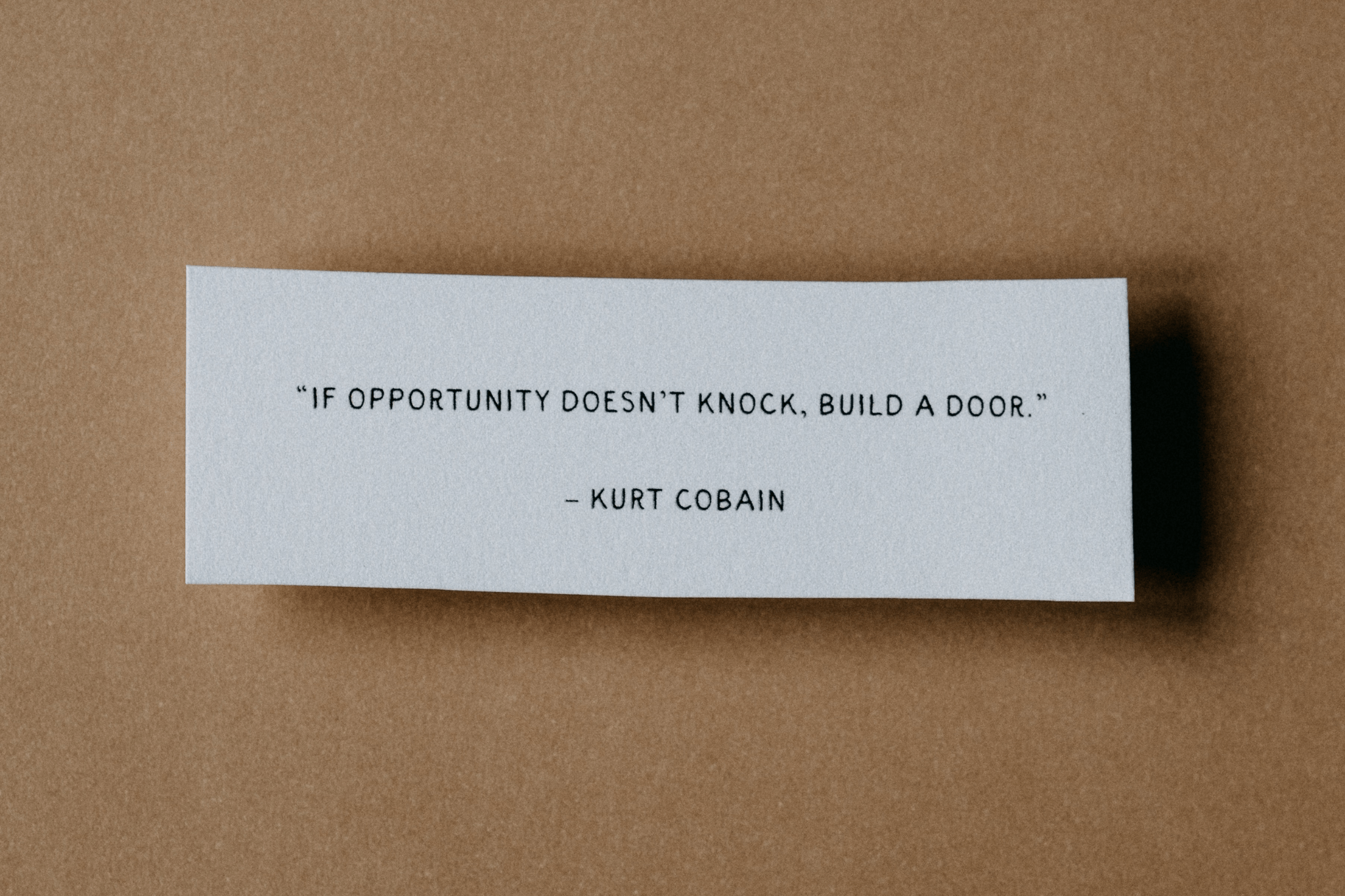 To err is human. And so is to feel lost.

Life for most of us is not one smooth sail. We course through storms, high tides, and navigational mistakes. When you’re in the middle of this mayhem, what can get you through? It is determination, hard work, and courage. It is faith. It is a plan of action. We need to build ourselves and make ourselves capable of weathering the shitstorm (ref: The Subtle Art Of Not Giving A Fuck). One way of doing this would be to draw inspiration from other people and learn from their mistakes. Motivational speakers have the ability to ignite the spark within you.

Here is a list of the 10 best Motivational Speakers that will get your audience into action today: 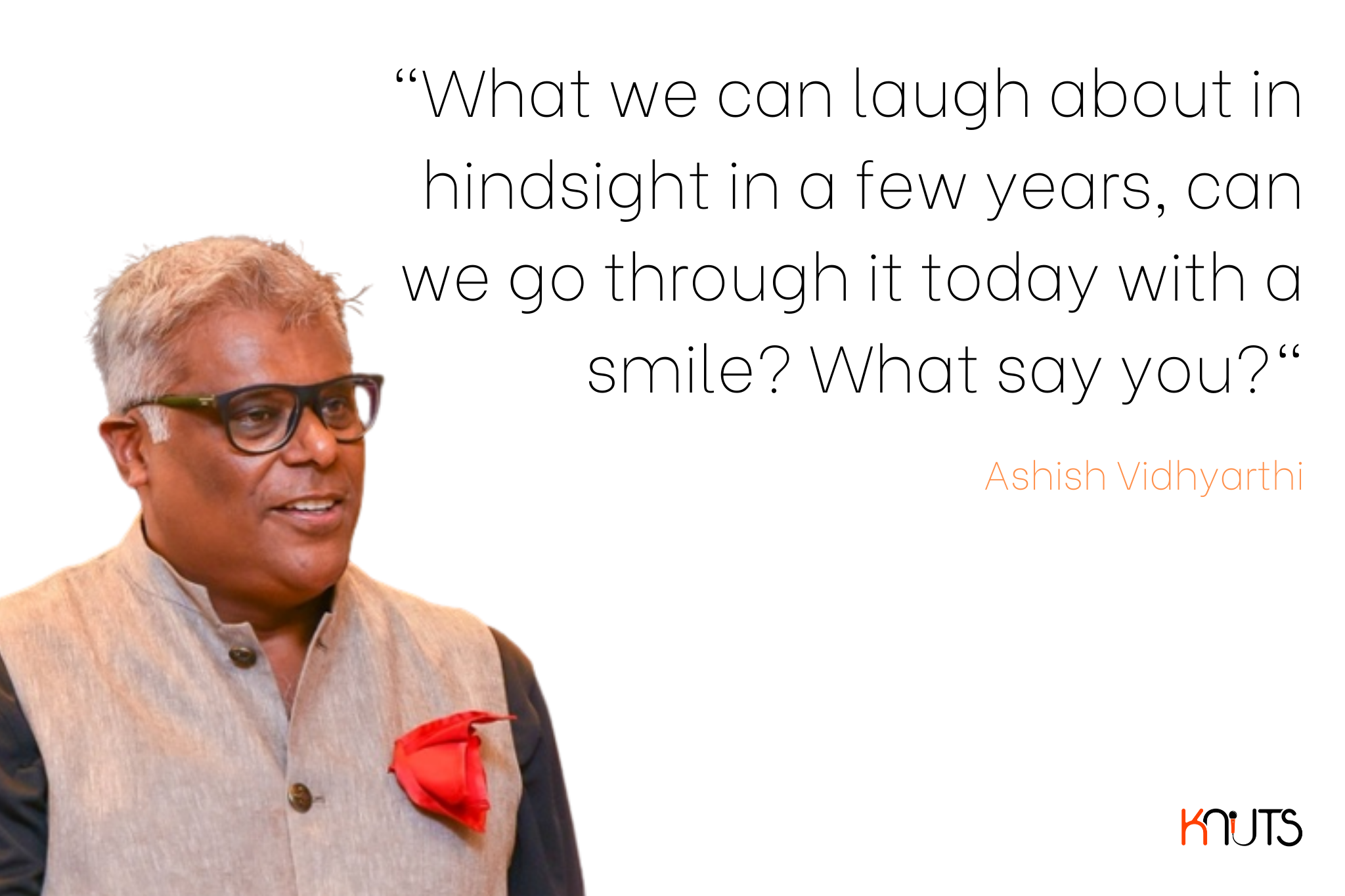 We all know about Ashish Vidyarthi, the actor, the man who has portrayed countless roles in Bollywood, Tamil, Kannada, Malayalam, Telugu and Bengali Cinema. But meet Ashish Vidhyarthi, the CONVERSATIONALIST. He believes that we need to hold more conversations about seizing the opportunity that is LIFE. We need to step up and bolt for it. We need to realise that throughout our lives, we’re students - we must always keep learning.

To create a similar space in the corporate world, Ashish started Avid Miner, an organization that creates modules tailored to each organization and the specific challenges they face. The idea is to encourage everyone to strike up conversations on matters that matter.

Ashish Vidhyarthi will make you feel like a champion, and he’ll help you truly become one. His speeches are impactful, engaging, and brimming with positivity. Time to take mental notes! 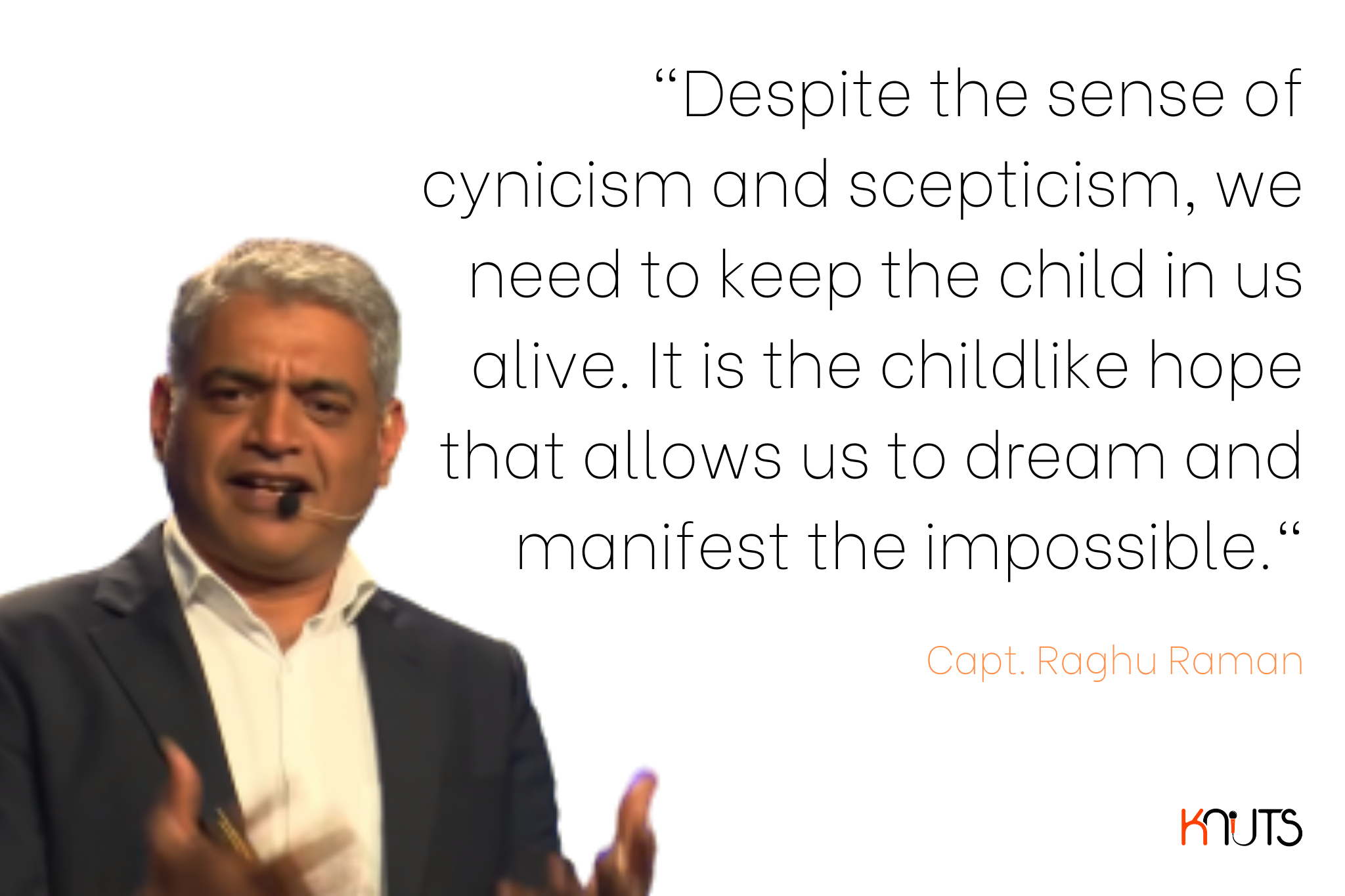 Capt. Raghu Raman is a man of diverse experiences. From combat in war to combat in business, he has seen it all. He began his career as a soldier in the Indian Armed Forces and then went on to take leadership roles in both public and private sectors. He retired from the force in 1998, following which he led different companies under Mahindra Group. In 2009, he was selected to be the first CEO of the National Intelligence Grid (founded by the Ministry of Home of the Indian Government), an ambitious project set up in the aftermath of the 26/11 Mumbai terror attacks. After 5 years of leading the NATGRID, Capt. Raghu Raman went on to become Reliance Industries’ Group President, Security, Risks, & New Ventures. Now also a published author, Capt. Raghu Raman channels his life experiences to teach the invaluable importance of perseverance and determination. Don’t let the smaller things block your vision. Don’t let setbacks decide your worth. Be ready for combat, ALWAYS. No matter the quest, he always has words of wisdom to share. 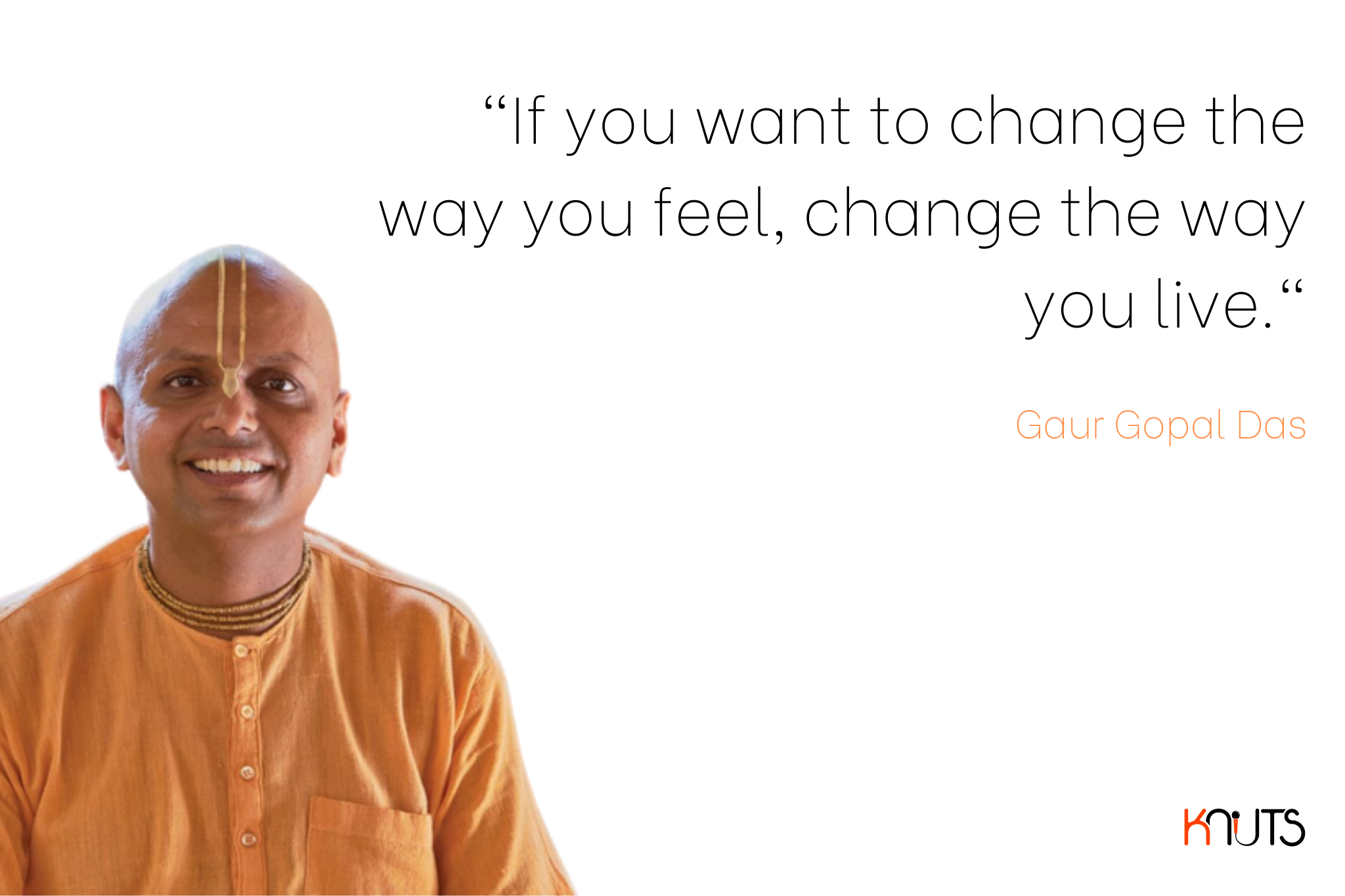 Gaur Gopal Das is a renowned life coach, storyteller, and author. After briefly working at Hewlett Packard as an engineer, he decided to follow his true calling and became a monk. Just as a coach helps the team play better, Gaur Gopal Das has helped people worldwide unlock and understand skills and philosophies vital to a good, happy, and purposeful life. Gaur Gopal Das is your spiritual guide and strategist. The man will remind you that sometimes the most difficult decisions in life require simple solutions. He is a harbinger of the modern-day relevance of ancient philosophies.

This Knuts Speaker may have a degree in electrical engineering, but he will help you decode the intrinsic science behind life. 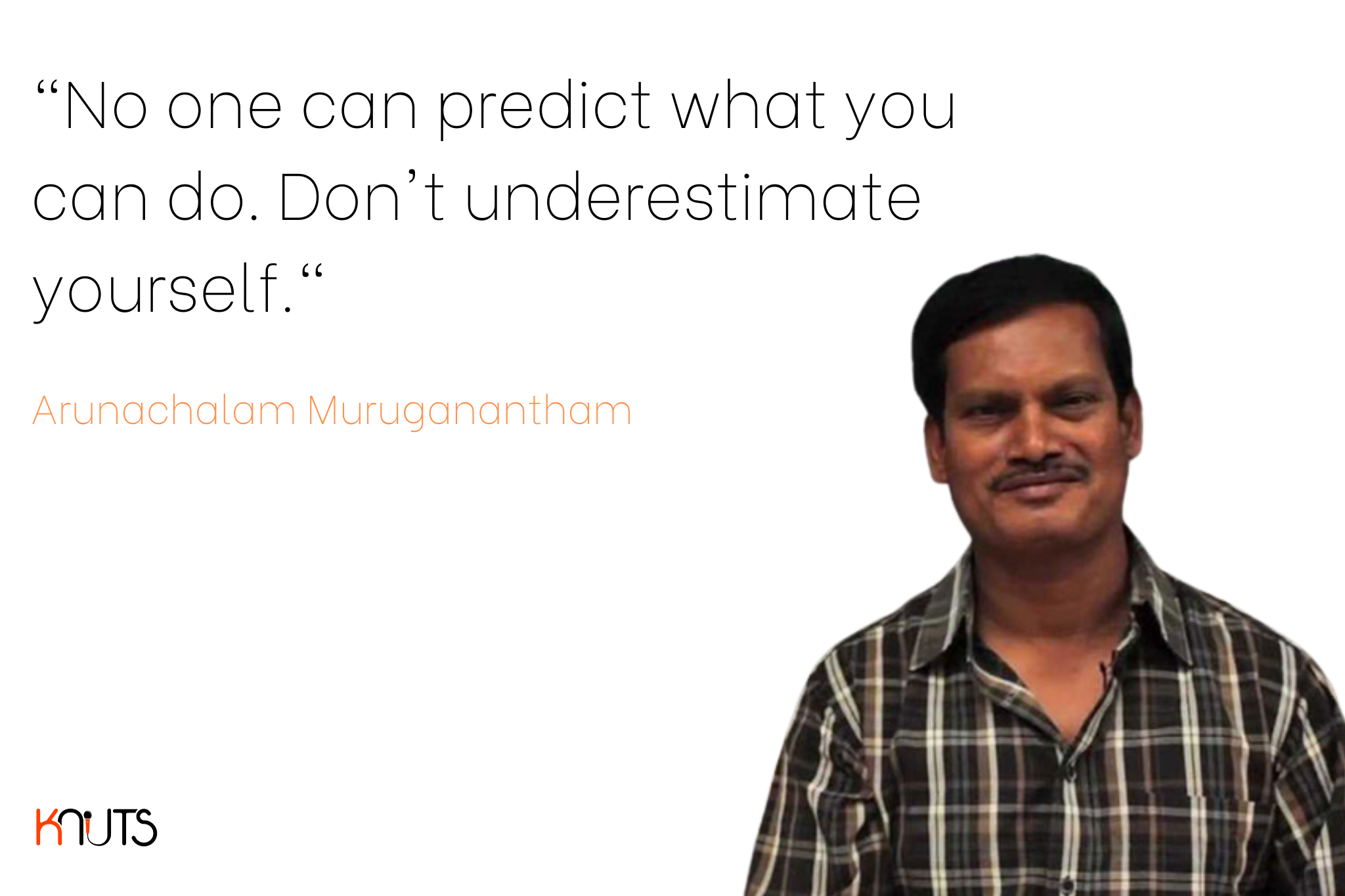 Arunachalam Muruganantham is living proof of what drive and determination can do. Hailing from a poor family in South India, a school dropout, Arunachalam decided to dedicate himself to a problem he witnessed his wife struggling with - affordable and hygienic menstrual padding. Along this journey, well depicted in his Bollywood biopic Padman where Akshay Kumar portrayed him, he faced many obstacles, coming from both society and his own family. Culminating with the creation of the world’s first low-cost sanitary pad manufacturing machine, his story is nothing but inspiring. His innovative streak, humility and selfless nature are reminders of one of the most important values in life - the art of giving.

When you see Radhika Gupta, you see the girl with a broken neck. When you hear Radhika Gupta, you see the girl with an indomitable spirit. As a child, Radhika did not have a permanent home base as her family had to move often given her father’s job. Despite that, Radhika made her way to Wharton Business School on scholarship. But her journey ahead was not without setbacks. During campus placement, her first seven interviews ended with rejections. She faced suicidal tendencies but managed to crack the McKinsey Interview that took place the next day. When asked why she was hired the interviewer responded, “Because you are unique. You are different.” After working on Wall Street for a few years, Radhika embarked on another difficult journey - she came back to India and started Forefront Capital Management with a few others. In 2014, Edelweiss acquired the company. She is now the MD and CEO of Edelweiss AML. Radhika Gupta will remind you that what you really need to make it in life is an appreciation for your uniqueness.

Ramesh Aravind is an award-winning actor, director, TV host, screenwriter, and published author. With a career spanning over 35 years now, Ramesh Aravind is one of the most revered actors in South Indian Cinema. He has acted in more than 150 movies, in over six languages. Apart from being excellent at what he does, he is also a sagacious motivational speaker. Hear what success really is, from the man who has achieved the kind of success desired by all. He believes success goes beyond money, fame, or becoming better than everyone else around you. It is about achieving peace. It is about improving yourself every day. His words will inspire you to beat all odds and achieve true success. 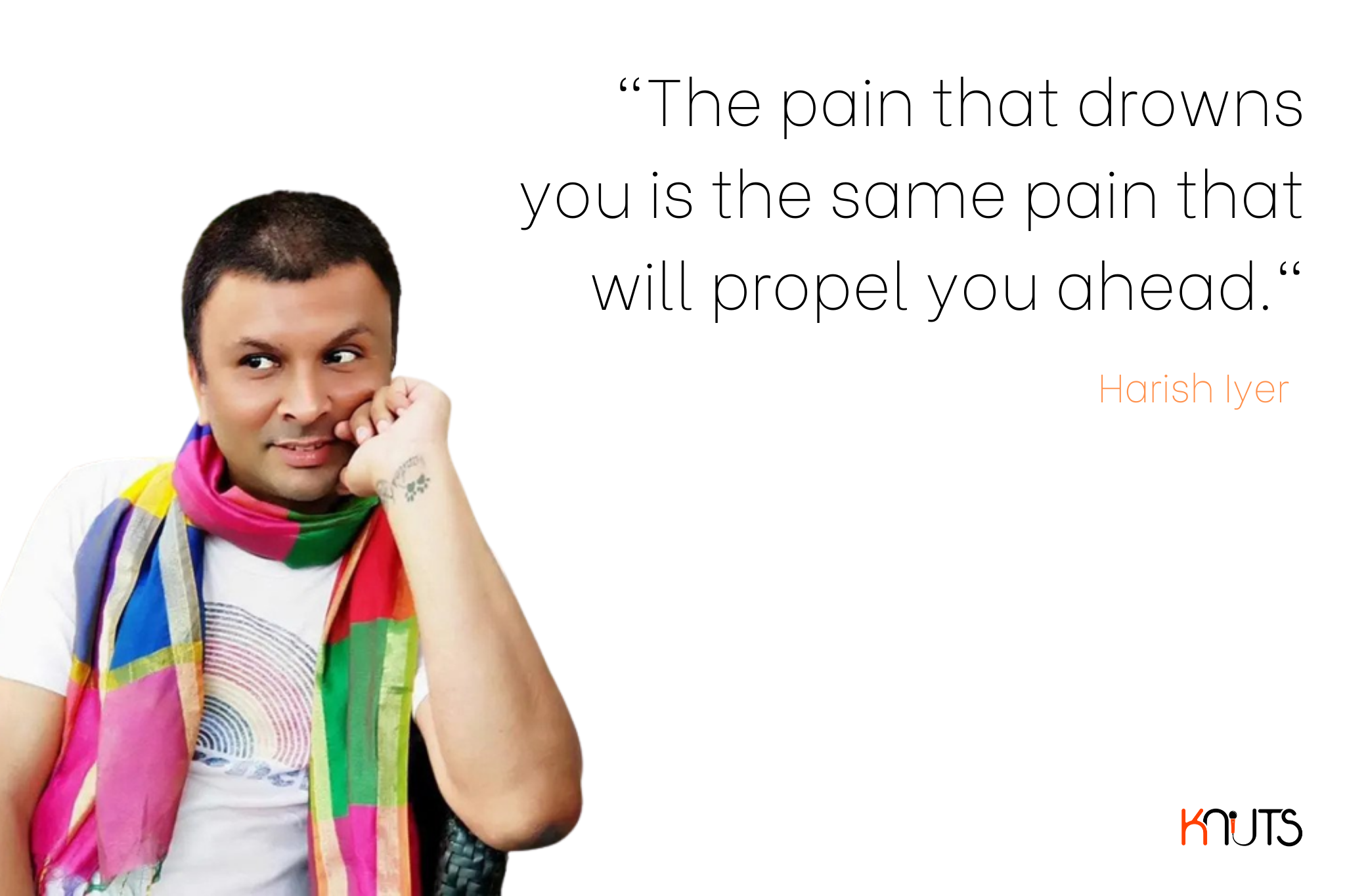 Harish Iyer (he/she) has so far in his life, added several feathers to his cap. He is an activist who fights for women’s rights, animal rights, LGBTQ rights, and child rights, and the list keeps going. He is also a professor, a columnist, an author, and a gender/sexuality trainer. But the most important feather on his cap? He is an empathetic human being. A survivor of child sexual abuse, Harish Iyer made his pain his strength. He became the first person in India to openly talk about male child sexual abuse. What brought Harish to this point? The realisation that ‘silence breathes violence.’ It became important to speak up - for himself as well as for others. In 2013, Harish Iyer was included in the Guardian’s list of 100 Most Influential LGBT Persons in the World. Harish Iyer will leave you feeling all the right things - empathy, courage, self-love, and possibilities.

A specific experience can change the course of one’s life.

Settled in the US, Amit Vaidya was living a successful life as a media consultant when his life suddenly came to a deathly halt. At the age of 27, he was diagnosed with cancer. He had already lost his father to cancer and would lose his mother to the same in a few years. Despite aggressive chemotherapy followed by a short-lived remission, Amit found himself battling the same demon again, this time much more lethal. Having lost all hope, he made preparations for his own funeral and decided to make one last trip to India. What he did not realise then was that the country was going to bring him back to life. Encouraged by friends and relatives, he decided to give alternative medical treatment that included meditation, yoga, desi cow milk, ghee, curd, gobar, and go-mutra a go. He then moved to a small village in Kerela where he developed a special bond with a cow. Miraculously, he would become cancer-free. Amit Vaidya has chronicled this unique journey in his best-selling book ‘Holy Cancer: How A Cow Saved My Life.’ Now, he is also an Expert Generalist, Wellness Empowerer, Author, and Writer. Amit Vaidya is here to share the valuable lessons this journey taught him, the most important of which is to live for today. 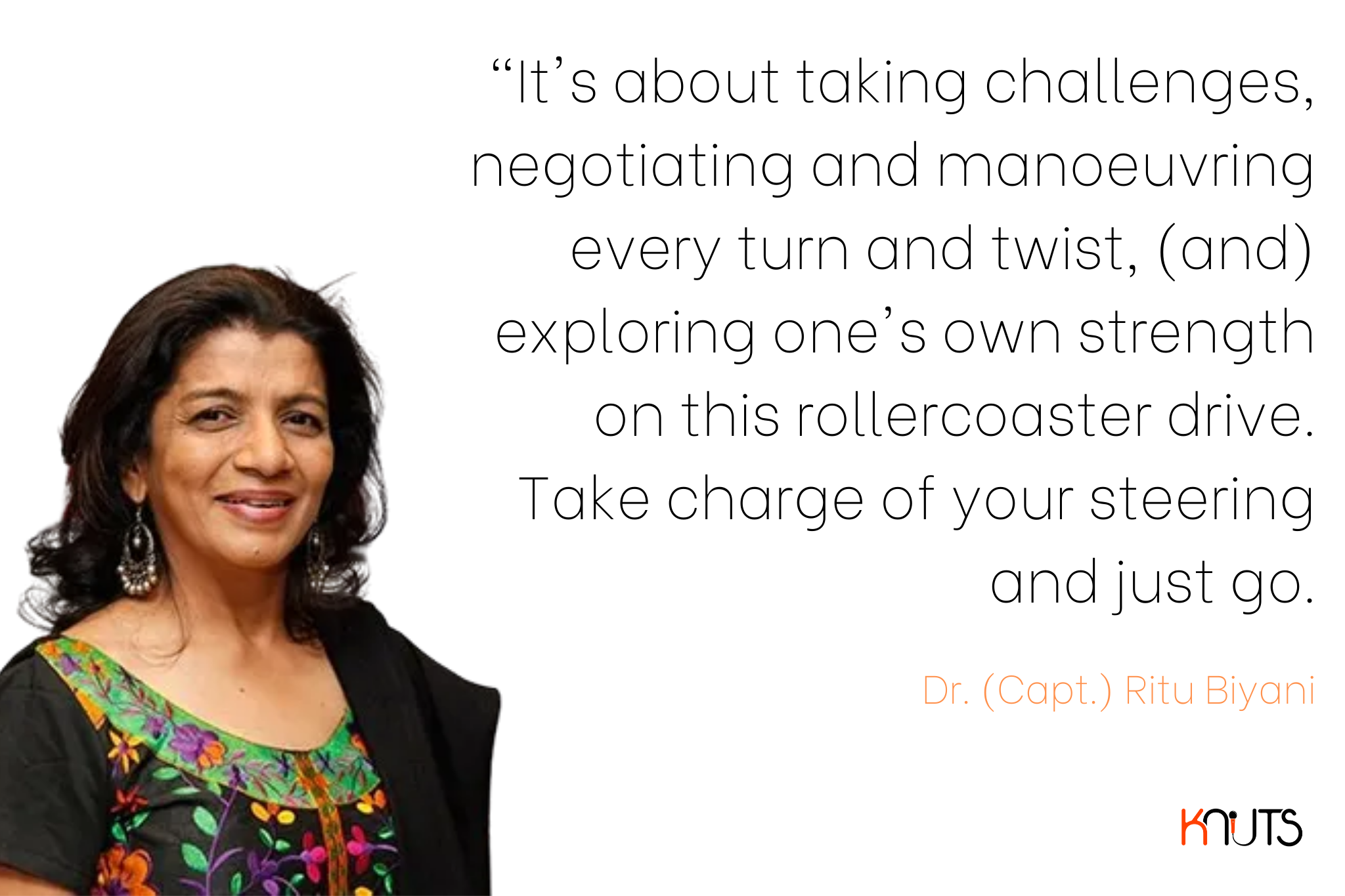 Dr (Capt.) Ritu Biyani is a woman of steel. Her entire life, she has been busy setting benchmarks for others and serving society. Her conservative Marwari family background stood no chance in front of her zeal. After completing her Bachelor’s degree in Dental Sciences, she joined the Indian Army. She went on to become the first woman paratrooper from the Dental Corps and served the Indian Army as a captain for 10 years (1981-1992). In 2000, Dr. (Capt.) Ritu Biyani was diagnosed with Breast Cancer. She underwent 2 surgeries and six chemotherapy cycles but nothing could deter her. Once Ritu was cancer-free, she knew what she had to do next. It became her life’s mission to spread cancer awareness. This was the beginning of project High>>>Ways - Ritu along with her daughter Tista drove 30,220 km covering the 4 tips of the country and delivering 140 breast, cervix, and oral cancer awareness workshops in 177 days. They reached out to urban, rural, and tribal communities in 23 states and two union territories, along this journey that traversed through some of the most difficult terrains in the country. Her mission is still alive and continues to spread awareness around the world.

Dr. Capt. Ritu Biyani will help you find the strength to take charge of your life, face challenges head-to-head, and see your scars for what they really are - a reminder of every battle you’ve fought. Hear her and watch the adventurer in you roar! 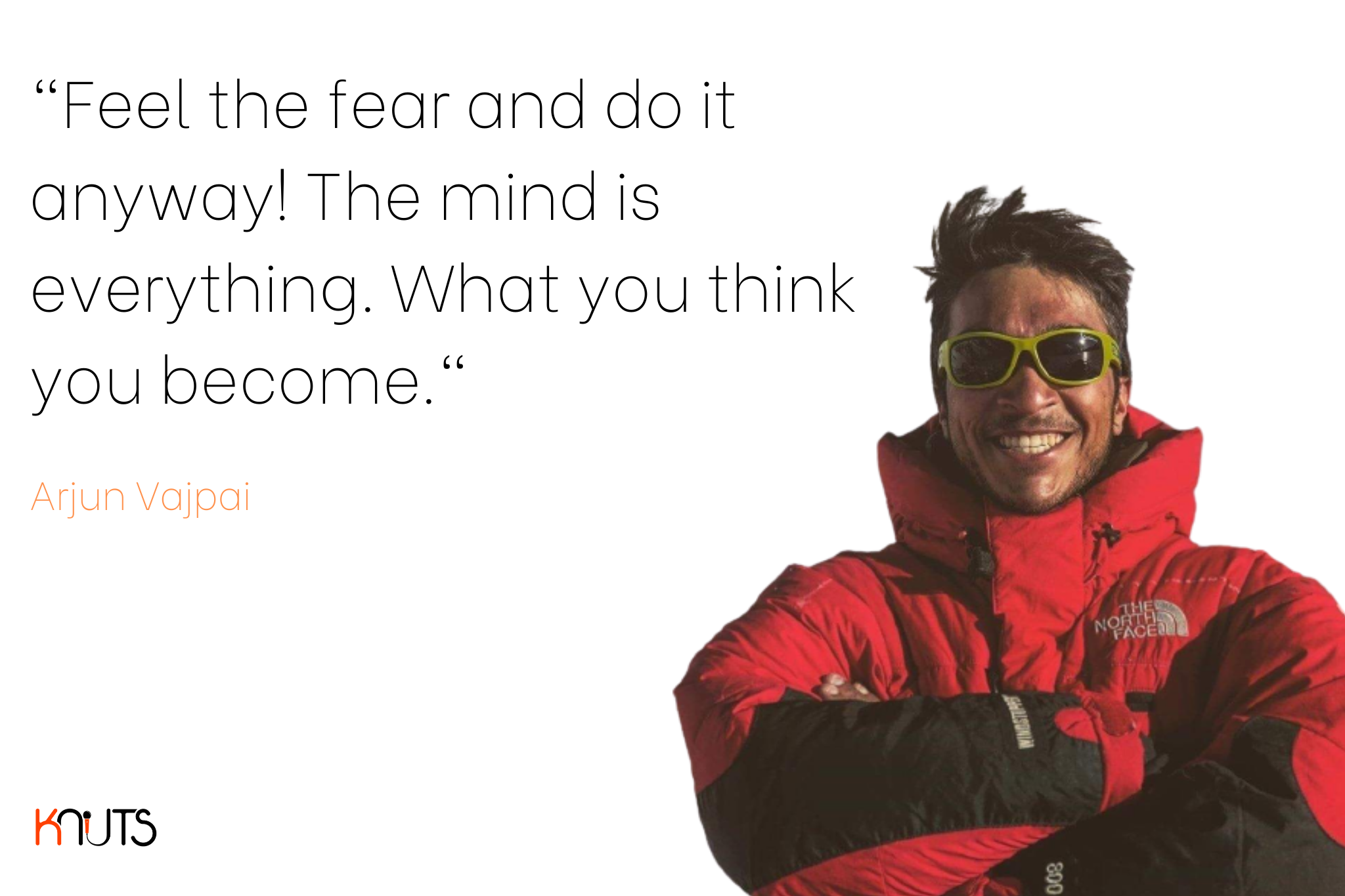 Your childhood dreams are not necessarily childish. Proof? Meet Arjun Vajpai, who at the age of 16, became the youngest Indian to climb Mt. Everest (2010). Drawn to mountains and adventure from a very young age, Arjun knew his calling - mountaineering. And he was ready to work for his dream. In 2009, he joined the Nehru Institute of Mountaineering. His two years of training culminated at the highest peak of the world - Mt. Everest! But this was just the start. Arjun Vajpai’s love for mountains has made him the youngest in the world to reach the summit of six 8000m and above mountains. This journey was not without setbacks. Arjun faced all kinds of obstacles - bad weather, natural calamities, and even paralysis. But he always bounced back with his never-back-down attitude and willpower. Arjun will help you realise that sometimes, conquering your Mt. Makalu may require 4 bold, breathless attempts. The only way to success? Never give up.

You can find inspiration anywhere, in you too. Just don't stop believing, and don't stop the hustle.

This was our list of the 10 best motivational speakers in India that will get your audience into action today. Found your inspiration? Connect with us now!