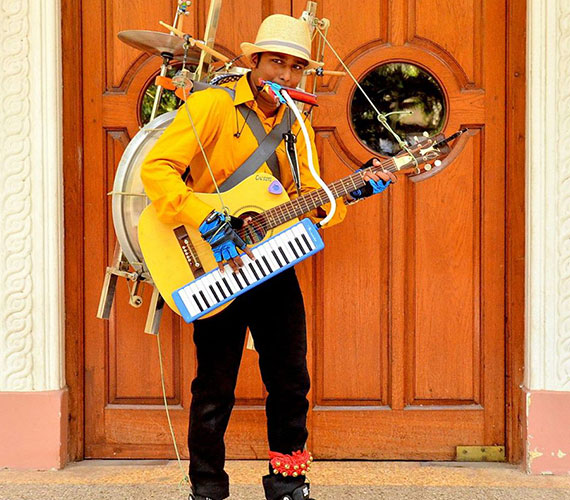 ‘NEVER GIVE UP’
How to be a Self-Made Musician
Reason Your Living
Key to Social Media Boom
Passion into Career: How?

Gladson Peter is a singer songwriter from Mumbai and has been playing music since the age of three. He is a multi-instrumentalist and plays over 45 musical instruments. His primary instruments are drums, ukulele and piano but has been versatile with various different genres of music with several instruments. He's been a pioneer and one of the leading musicians in the current scenario. Playing with over 6 different bands, in which he is the lead singer and musician for 3 bands. They specialize in Original and Independent music, English and Hindi.

Gladson has been on various shows and has done more than 200 shows per year in the last couple of years. He also has been on shows like IGT and the Kapil Sharma show and also played for the prestigious EU Chambers.

Currently he is known as India's first and only ONE MAN BAND where he plays over 13 instruments together, which includes a combination of popular instruments like the guitar and drums to the lesser known kazoo. The ONE MAN BAND has played at several festivals, shows and events and has been inspiring a lot of new aspiring musicians. The message is to NEVER GIVE UP. There are only about 20-30 ONE MAN BANDS in the world, from different countries and we're glad to have Gladson as our only INDIAN One man band.