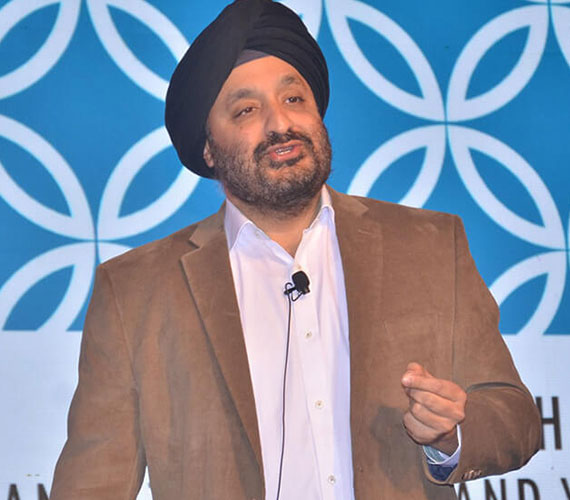 Jaspreet is the digital advisor to the Mahindra Group, where he helps transform its diverse legacy companies to digital business models and mindsets. He is an acknowledged expert on blockchain and cryptocurrency, especially for businesses. His sessions are chalk full of useful takeaways that the audience can apply into their businesses and make changes on the go.

He led the team which built a bill-discounting PoC (Proof Of Concept) for Mahindra Finance, the first product of its kind to be built on blockchain in this part of the world. Now, this PoC is being built into a production system, which will be one of the first blockchain full production solution built in India/Asia. He is now driving another larger Blockchain PoC in manufacturing.

Jaspreet writes and speaks extensively on blockchain and crypto for leading Indian publications and in Indian and global blockchain conferences. He is a recognised leader in the digital, retail and ecommerce space. He is active across the tech start-up ecosystem, and has invested, advised, mentored and incubated a dozen tech start-ups.

Jaspreet was the Vice Chairman of IAMAI, an Evangelist for the Mobile 10X program, on the Advisory Board of SPJIMR, and a Charter Member of TiE. He has spoken at HBS, ISB, IIMA, IAMAI, CII and other academic and industry forums. Recently, SAP and Mint crowned him the ‘Digitalist of the Year 2017’.

Jaspreet does think that there is some irrational exuberance in crypto (especially bitcoin, though he is invested in it and also in Ether and Ripple); but he strongly believes that the underlying technology, blockchain, has the potential to change the world as much as the Internet did!

He also believes that blockchain is a philosophy as much as a technology, and can have massive applications in Supply Chain, BFSI, Manufacturing, Energy, Auto, etc. His assertion is that the most fundamental impact of blockchain will be in government, and it has the potential to create a friction-less, corruption-less government!

He was the SVP- Digital Transformation, equivalent to the Chief Digital Officer, for the $18bn Mahindra Group.

Jaspreet led the online platform business and consumer business of Microsoft, was selected through TAS by the Tata Group, and was a part of the founding team of Baazee (later eBay India).

He has established businesses from scratch, set-up teams, systems, technology and operations, led businesses and teams, substantially scaled each business in terms of revenue and headcount; and turned around businesses to profitability.

He has been the Vice Chairman of the Internet and Mobile Association of India; a Member of FICCI Media & Entertainment Committee; have lectured at HBS, ISB ; mentor, angel-fund, and currently advise/mentor several tech start-ups across India.

At Microsoft, he was awarded the Retail Platinum Award for Management Excellence, the single highest recognition in Retail in Microsoft globally; recognised as a Global High Potential Employee; and was recognized as among ‘The Top 25 Young Managers in India’ by Business Today, India’s largest Business Magazine.