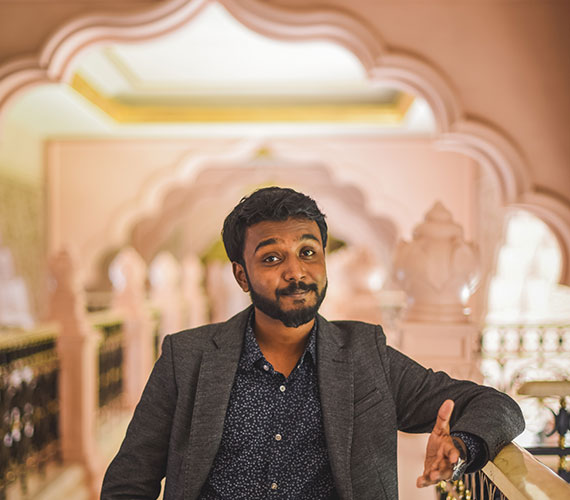 The Importance Of Learning New Skills (Using Beatboxing As A Medium)
Using Beatboxing As A Medium, Learning How To Be:
An Effective Leader/Boss
An Attentive Follower/Employee
Learning How To Work In A Group And Collaborate
How To Fight Off The Odds And Establish A Career As An Entertainer/Musician Or In The Creative Fields
Get Over Stage Fear: How To Have More Confidence On Stage And How To Speak To Large Audiences
Learn How To Beatbox

He is considered to be India's Biggest Beatboxer with over 1,600 shows to his credit since 2006. He started off his career as a Musician in 2006 and moved onto presenting and hosting events as an MC in 2007. He then successfully started off his career as a beatboxer in 2008 travelling across India performing his solo set at public, private and corporate events. He currently works as an on stage and is a front of camera personality, A Beatboxer, Panel Moderator, Presenter, Host, MC and dabbles a little with Artist Management and works with a few start-ups.

In 2011 he directed two successful world records with Guinness World Records and Limca Book of Records. In 2012 he bagged the award for Bangalore Young Achiever.

He was the first line up of a Sony Music Project called Voctronica in association with the British Council. A multiple-time speaker, performer and MC at multiple TEDx talks across India (TEDxBMS, TEDxTirupathi, TEDxNITK, TEDxWalledCity, TEDxDelhi, TEDxIIITD among a few more).

Vineeth directed 2 world records for the “World’s Largest Beatbox Ensemble” with the Guinness World Records and Limca Book of Records. He is -