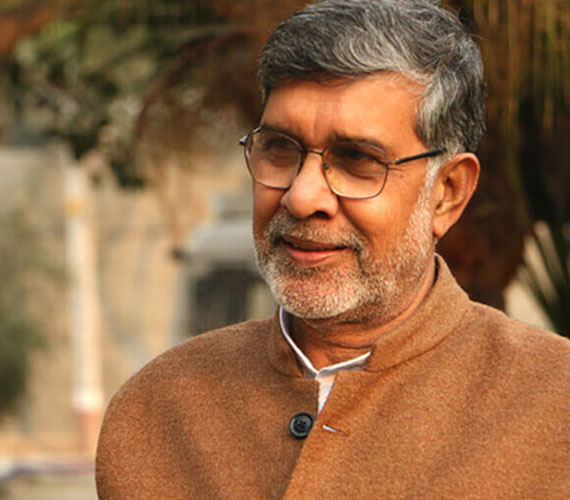 The Price Of Free
How To Make Peace? Get Angry
Reaching Out To Children
The World Is One Family
A Great Moment For All Those Children
Globalizing Compassion

“I will see the end of child slavery in my lifetime.”

Mr. Kailash Satyarthi has been a tireless global advocate of children’s rights for four decades now. He left a lucrative career as an Electrical Engineer and started ‘Bachpan BachaoAndolan’ (Save the Childhood Movement) to rescue children and their families from the shackles of slavery paving way for their reintegration into mainstream society. Under his aegis, the movement has rescued over 88,000 children from the scourge of bondage, trafficking and exploitative labour till date.

In 1998, Mr. Satyarthi conceived and led the largest civil society network for the most exploited children- the Global March against Child Labour that traversed across 103 countries covering 80,000 Kms, mobilizing unions, civil society and most importantly, children with a sole demand for an ILO Convention on Worst Forms of Child Labour. This march led to the adoption of ILO Convention 182 on the Worst Forms of Child Labour which went on to become the fastest ratified convention in the history of ILO. Mr. Satyarthi is also the architect of the Global Campaign for Education, an exemplar civil society movement working to end the global education crisis. Mr. Satyarthi is credited for the first ever civil society – business coalition by establishing Rugmark (now known as Good Weave) - the first of its kind certification and social labelling mechanism for child labour free carpets. This mechanism was engineered by Mr. Satyarthi much before the phrase Corporate Social Responsibility was even coined.

In 2014, he was awarded the Nobel Peace Prize for struggle against the suppression of children and young people and for the right of all children to education.

In 2016, Mr. Satyarthi founded a novel and unique initiative Laureates and Leaders for Children that has brought together several Nobel Laureates and Leaders from across the globe to build a sense of urgency, collective responsibility and a strong moral voice to galvanize political will for ensuring the rights and safety of world’s children and young people in an endeavor to end violence against them and creating a child-friendly world.

Mr. Satyarthi’s unrelenting efforts to end child slavery, trafficking, forced labour and violence received international support when he succeeded in getting child protection and welfare-related clauses included in the Sustainable Development Goals (SDGs) of the United Nations back in September 2015.

Mr. Kailash Satyarthi is one of the tallest leaders and the loudest voices in the global fight against exploitation of children. Not caring even once about the life-threatening attacks that he has survived, Mr. Satyarthi has personally rescued tens of thousands of children from the scourge of slavery. His fearless and unrelenting policy advocacy efforts towards the elimination of violence against children have resulted in path-breaking legislations globally.

Mr. Kailash Satyarthi envisions a world where the Youth realizes its truest potential as the agent of positive social transformation. It is for this reason he launched the 100 Million for 100 Million Campaign in December 2016. This campaign is a global intervention to mobilize 100 million youth for shaping a better future for 100 million children who have been denied their rights and liberties.