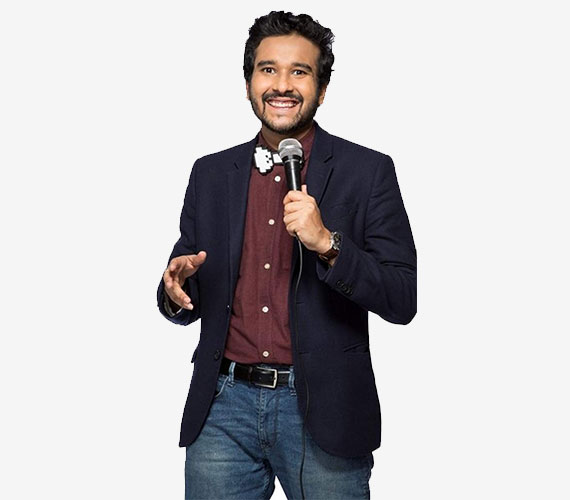 Sahil is one of the founding members of East India Comedy. He’s performed more than 1500 shows and counting, including performances in New York, London, Singapore, Kuala Lumpur, Bahrain, Oman and Dubai.

In 2018, he toured his show Childish Behaviour across 25 cities, with the show also landing on Amazon Prime Video. Sahil also was one of the performers at the Global Citizen festival in 2016 where he performed for almost 80,000 people and was on the same lineup as Coldplay.

He’s written columns for Grazia, Deccan Chronicle, Indian Express and Buzzfeed. He’s created digital content in association with Tom Holland (Spiderman) as well as Netflix, with a Narcos Promo that was featured internationally.

Sahil’s stand-up style is uniquely observational and personal. He dabbles in one liners, puns and story-telling to talk about immature life, the silliness and pointlessness of things around him and has an innate ability to making stupid faces and silly sounds to make anyone laugh. Apart from all this…Sahil loves bragging about his achievements.

He is known for his unstoppable puns and mental taxation. He is one of the founding members of the East India Comedy and his off-centre one liners have taken his comedy across the country, with shows in over 8 cities.The versatile comedian is a regular at the Comedy Store and other leading venues in cities like Mumbai, Pune, Delhi, Kolkata, Chennai, Bangalore, Coimbatore and Hyderabad. Apart from comedy clubs and sold out auditoriums, Sahil has also given a TEDx Talk, has been featured on shows such as Channel V UR Fired and The Front Row on Star World, and has written articles in MTV Noise Factory, one of India's leading humour magazines. Sahil is also known for his YouTube show The Ad Show.