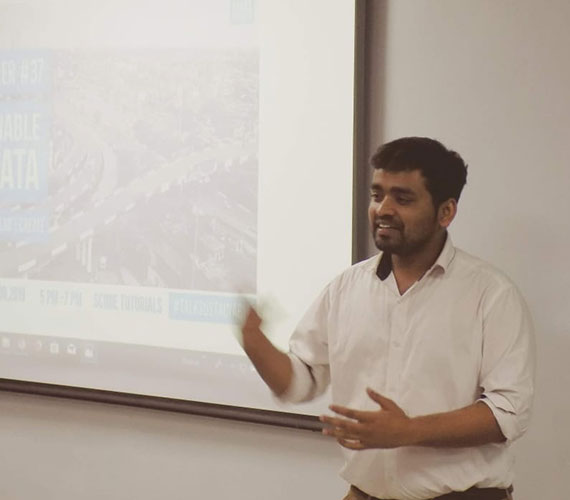 Why It's Okay To Be Unplanned.
Unconventional Choices
Finding Your "The Version" (A Talk OnIdentity And Value Creation)
Move Ahead OfDoctor, Engineer And MBA. Look Big, Picture Big.
Art Of Management - Things, People And Emotions

Shreyas is a young social change-maker from a small town in Bihar, who believes in creating a sense of positivity among the millennial. He is a firm believer of the fact that a little guidance and mentorship to right talent can do wonders.

Shreyas was a decent performer in academics since school and all thought he would do well in exams. He had his career all planned out to go to good college and pursue his plans. But he didn't score well. In fact he didn't even get a 90. The most liked subject, English let him down. Planning collapsed but Dream vanquished? No

But what did he do. He worked every day on himself. He got into Xavier's through Entrance exam, worked on himself right from scratch and kept believing. He was rejected, scolded but he continued.

He got into development sector. Something people rarely talks about let allowing. He faced lot of rebuffs from family, friends etc. But he continued. He always says, I had dreamt of it. I'll do it. People neglected his idea, he didn't have a team and from there, a guy from a small town in Bihar, who was just another geek, became India's one of the youngest Published researcher and a social entrepreneur. He now leads a team of 60 people, work with names like Facebook, One plus, Twitter, Tata, etc. He is one of the youngest social change-maker of Kolkata and has been vastly covered by lot of media forums.

He never planned this. You know that's what people say, Life happens to you when you're busy planning other things. Shreyas believes apart from being an engineer, doctor, CA etc, what's the value you're creating for yourself and for others. A single addition to wheel on baggage trolley has wiped off coolie class as a whole. Tomorrow software comes and your work as a CA, Engineer etc is redundant. So, what's the value you're creating? What is it you're giving back?

He is India’s one of the youngest published researcher having presented and published his work on consumers’ perception in International Journal (ISBN: 81-8324-893-4) at the age of 21 after winning the best presenter and paper globally in the midst of scholars, research fellow etc. from across the globe.

In his advent to do social good and pursue his passion for development sector, He started MASH project Kolkata Chapter, a not-for-profit, youth led Social Entrepreneurial organization, aiming at conducting cause based leadership workshops, experiential sessions and training programs mainly aimed at capacity building.

He is also a Shaper and member at Global Shapers, the youth wing of World Economic Forum. He has been a founding member of The Soch Network, a media startup based out of Kolkata. A CA and CS aspirant, Shreyas is a word addict who blogs frequently on sports and literary contents and has a thing for value adding researches having presented his works at various institutes.

He gladly talks about how it is okay to be confused and try doing everything before you end up knowing your ‘The Version'.