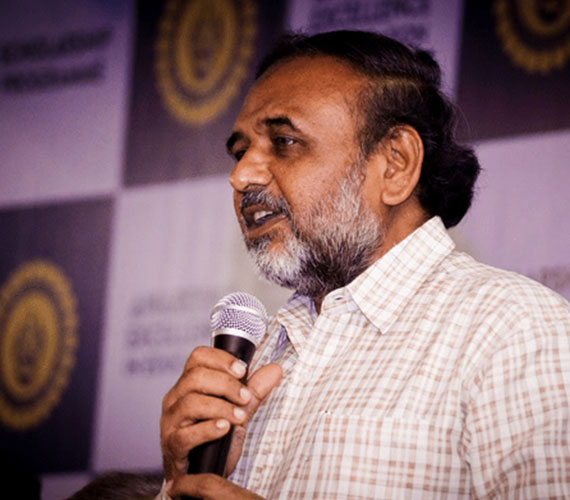 The Art of Negotiation
The Power of Communication
The Structure of Conversation
Masterclass: Finance
Storytelling As Education

Prof. Dilip Shah, has had a career spanning more than thirty years, wherein he has donned various roles in the world of finance and teaching. He is one of Kolkata’s top most experts on matters relating to projects, finance, taxation and company law.

Currently, serving as the Dean of Student Affairs at Bhawanipore Education Society College, Prof. Shah is one of the most loved and respected professors in the college which is largely due to his knack towards communication, leadership and continuous strive for attainting excellence is whatever work he is involved in.

Apart from being a professor, Dilip has been a part of the training and education committee ofThe Institute of Company Secretaries of India (ICSI) for over twenty five years. Presently he is on the Investor Grievance Resolution Panel (IGRP) of the National Stock Exchange, MCX Sx, and the clearing corporation. He has spoken extensively at various institutes like IIM Joka, IIT Kharagpur etc., chambers of commerce, clubs and associations in India.

Prof. Shah was the Founder Convenor of the Youth wing of the prestigious Bharatiya Bhasha Parishad and has organised innumerable events for the Parishad. He also co – founded a youth group called DISHA which does social work.

He is proud to have served is Alma-Mater for a period of more than three decades, which has made him a popular figure in the teaching circle of Eastern India. During his career, he has passed through both, business and profession which has given him key valuable insights regarding life’s journey.

Having been a visiting faculty to all the three premier professional institutes in the background of commerce, namely, ICAI, ICSI And ICWAI, he’s an expert orator and loves to include more first-hand experiences in his sessions. He also holds an advisory position at the National Stock Exchange.

In 2011, he was felicitated by the Lions Club for his outstanding contribution to education.

He believes, that we cannot enrich ourselves without enriching others.