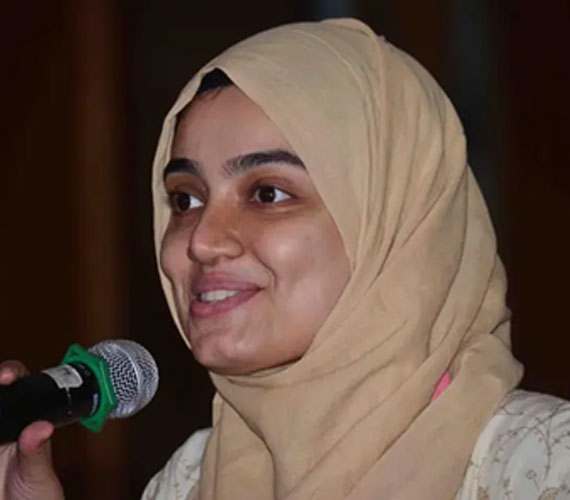 Past: Feeling Sorry or Heading towards Glory?
Sowing for Success
6 M’s of Being a Woman
Creating Human Connections
Being a Global Citizen and Exploring the Social Sector
Peace by Piece

"Average is boring and that is not going to be me." - Madiha Ahmed

The Promise of a Pencil: How an Ordinary Person Can Create Extraordinary Change – AdamBraun
Creating a World Without Poverty - Muhammad Yunus
The 7 Habits of Highly Effective People: Powerful Lessons in Personal Change - Stephen R.Covey
Ignited Minds: Unleashing the Power Within India -Dr.A.P.J.AbdulKalam
How to Have a Beautiful Mind - Edward de Bono

Triangle Team Leader at Lifebushido (USA) | CEO at YouEd-Empowering YOU to LEAD | Sub-committee Member of Ladies Wing at The Calcutta Muslim Orphanage, Kolkata

A dreamer & doer, a lifelong learner & global citizen residing in Kolkata, India, Madiha Ahmed started the journey of becoming the woman of her dreams in early 2016 when she said yes to her dreams. She is a Story-teller, a Public Speaker, a STEM Enthusiast, an Educationist, a Social Entrepreneur, an author-to-be, a blue belt at International Gosoku-ryu Karate-do Association, who strives to connect ideas and people for a peaceful world.

In her teen years, when people pointed out her talkative nature as a weakness, she decided to turn it into her strength so that she may be known for it. She has shared her story & insights on various platforms since January 2018 - TEDxBESC on "Glimpse into the mind of a woman who said yes", Allercon on "Research the Soul", Women in STEM Roadshow, Kolkata by OSU, USA on "Indian.Woman.Science", Sarvajanik College of Engineering and Technology, Surat under TED club on “Saying YES to yourself”, Human Library Surat on “Creating Human Connections, Global Shapers Surat on “Being a Global Citizen & exploring the Social Sector", Rotaract Clubs in Surat on “A coffee chat with Madiha Ahmed on Career, Cause and Change” and Rotary Club meeting with Advocate Priti Joshi of Gujarat High Court on the eve of Women’s Day, Sister Nivedita’s 150th birth anniversary celebration organised by Ramakrishna Sarda Mission Sister Nivedita Girls’ School on “My reflections as 21st century modern woman on the life of Sister Nivedita.”, Virtual speaker at The Mindful Soul Academy, Australia on "Feeling sorry or heading towards glory?" & same live at Ittehad in Akola, Maharashtra to students of Manav College of Engineering and Technology & Shri Shivaji Education Society's of Amravati College of Engineering and Technology, the first female Motivational Speaker after two IIT male speakers in the last 2 years.

Madiha Ahmed is quietly waging a relentless war against a society that teaches us to shrug off the inconvenient truths, take things in the stride literally and carry on.

Her experience, while fighting injustice raises some very potent questions even as it teaches the dictums of non-compromise – of the need to stand one’s ground in on the face of adversaries that are all-powerful, to be empowered from within, to hold on to one’s convictions to give good a chance.

Hers is a story of triumph when all seemed to be lost, of our need to remain steadfast on the path of righteousness, even when confronted with odds that are seemingly impossible – a story of the triumph of the will.