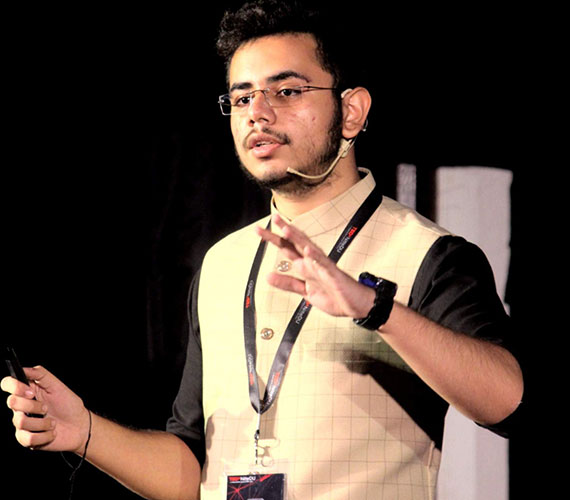 “Dream Big And Work Hard, No Matter What The Odds Are”

A Song Of Ice And Fire by - George R. R. Martin
The Power Of Now - Eckhart Tolle
The Alchemist - Paulo Coelho
13 Reasons Why - Jay Asher
12 Rules For Life – Jordan Peterson

Yash Tiwari is 4 times TEDx Speaker and Josh Talks Speaker at the age of 18, Young Published Novelist from Kanpur, Youth Mentor, with internationally acclaimed and awarded Debut Novel ;A Celebration In Tribulation; written at the age of 16.

He also delivered an International webinar in Africa forthe people of Nigeria, Cameron, Ghana, and other regions. He has delivered talks in variousstates all around the nation like Maharashtra, Jammu, Andhra Pradesh, Karnataka, UttarPradesh, Delhi, Odisha etc.

Yash has delivered multiple TEDx Talks, all by the age of 18. He delivered a Josh Talk, which has amassed more than 250,000 Views in a brief period of Time.

Yash is also working at MyCaptain as a Mentor, at The Climbers an IIM Bangalore incubated and United Nations recognized company, where he teaches youngsters (even civil engineers, medical students, academicians, professionals, etc) from all walks of life about how to write their Debut Novel.

He has been awarded among the Top 100 Inspiring Authors of India by The Indian Awaz & and recipient of Bal Ratna Samman by Maple Bear Canadian School,awarded with Author Of The Year award by NE8x, nominee for Best Debut Author awardby ICMDR, and also awarded with Global Young Leader Fellowship and Karamveer ChakraAward by iCOGNO in association with United Nations. As reported on various Reputed mediaplatforms, Yash wrote his Novel within a record time of just 22 days. It is the first time whensomeone has authored a fictional book on the unspoken &Creutzfeldt Jakob Disease let alone at such a young age.

Yash has been featured on International as well as National News Platforms.

Listen to him NOW!!!