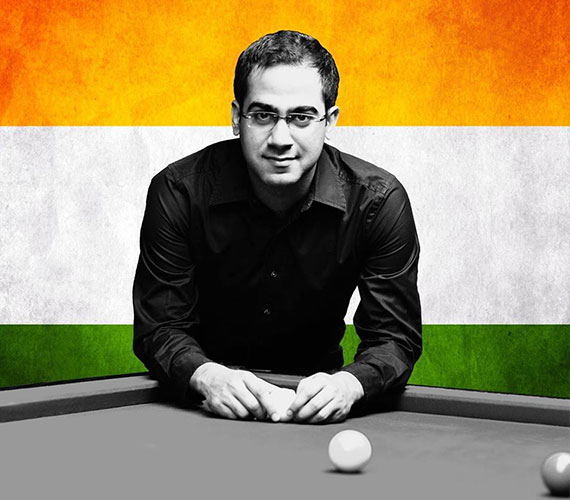 Reality Check: Reliving My Experiences
Embracing Failure
Importance of Passion In Propelling Oneself
Dealing WithYour Own Demons
Dealing with Anxiety
Hitching One’s Wagon To A Star
Supervising The Mind

Arjuna Awardee and one of India’s most talented cueist, Sourav Kothari’s journey began way back in 1989…

Aged only 4 years and studying in The YMCA kindergarten school, Sourav would often skip his lunch break to sneak into the billiards room adjacent to the school to watch his illustrious father, Manoj Kothari, practice endless hours.

The almost magical spectacle of the multicolored balls moving all over the 6 feet by 12 feet expanse of the imposing green baize captivated the imagination of this young lad.

In 1990, Manoj Kothari did the entire nation proud as he lifted the coveted World Billiards Title in Bangalore.

Extraordinary fanfare, celebrations, felicitations and media attention gripped the collective imagination of the Kothari family and particularly that of young Kothari who had already started to think in a different tangent and made up his mind to someday emulate his father.

With invaluable support from his school- La Martiniere for Boys, Kolkata and college - St Xavier’s College, Kolkata, Kothari kept adding one feather after another to his cap.

The bronze medal at the 2011 IBSF World Billiards Championship was the first milestone in Sourav’s International career.

From then on, it was never looking back as Sourav went on to win his first National Billiards Title in 2014, which went on to be the most stellar year of his professional career as he lifted his Maiden Asian Billiards Title and also led Team India to the final of the World Team Billiards Championship in Glasgow, Scotland.

An MBA graduate from Calcutta University, he was conferred with the “Khel Samman” Award by the Hon’ble Chief Minister of West Bengal Smt. Mamata Banerjee in 2015.

For any athlete, The Arjuna Award is a culmination of a lifetime’s worth of dedication and perseverance, heartbreaks and wins and above all, the support of friends and family who stand by them through thick and thin.

In 2016, Sourav was conferred with the Arjuna Award by the erstwhile Hon’ble President of India, Shri Pranab Mukherjee at the RashtrapatiBhavan, New Delhi.

Currently, Sourav is World No. 2 in Billiards. He also has the unique distinction of being the first individual Gold medalist in cue-sports at the Asian Indoor Games in Ashgabat, Turkmenistan in 2017. He has also been the Petroleum Sports Promotion Board Individual Champion in both Billiards and Snooker, where he represents his company ONGC.

Playing at the highest level, representing his country and most importantly doing what he loves – Sourav Kothari is an inspiration. It hasn’t been all rosy for him though, wins do have a major impact on an individual, but they don’t come anywhere close to the kind of everlasting impact losses have. He’s faced it all, but hasn’t forgotten anything. In those moments of pressure, what should you do? Ask Sourav!

He’s made the nation proud time and again, we salute you Mr. Kothari!